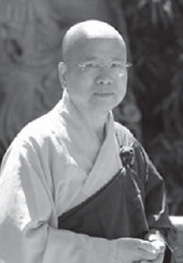 Buddhism as a Philosophy of Life

The Venerable Guan Cheng hosts a Dharma Talk five days a week, on the Chinese radio station AM 1320 (Overseas Chinese Voice) in Vancouver, Canada, and the Metroshowbiz FM 99.7 radio station in Hong Kong. He is also a bi-weekly Chinese language columnist for Hong Kong’s Buddhist Compassion Magazine, and has published four books in Chinese: Happiness Originates from the Mind (2003), How to Attain Happiness by Appeasing One’s Mind (2004), Prajna-Paramita Hirdya Sutra Commentary (2006), and A Bouquet of Incense from the Heart (2006).

Venerable Guan Cheng is a Certified Management Accountant (C.M.A.), and holds B.A. and M.B.A. degrees from the University of  Toronto. He speaks fluent English, Cantonese, and Mandarin Chinese.

Buddhism upholds the virtues of benevolence, perseverance, self-discipline, and charity. On a deeper level, Buddhism is a philosophy, a way of life, and the cultivation of one’s mind. In fact, Buddhists believe that harmony stems from the mind.

Buddhism is not a faith of idolatry but, rather, encourages free thought. It is more than a religion and goes beyond rituals and traditions. Buddhism is a profound philosophy discovered and taught by the Buddha over 2,600 years ago. It explains life and the world we live in.

The three truths of existence are dukkha, anicca, and anatta – suffering, impermanence, and the absence of an eternal self. According to Buddhist teachings, no phenomenon in this world is permanent or real. There is no permanent self or “soul”, for human beings are constantly changing under the influence of our surroundings and actions. Our minds are deluded to the true nature of the world, however, and we still try to hold onto our thoughts, bodies, wealth, and other earthly possessions. Trapped in the samsara of lives and deaths, with our attachment to these fleeting things, we suffer. Thus, the cause of suffering is the unenlightened mind.

These realities can also be summarized by the Four Noble Truths

2. The cause of suffering is attachment

3. The cessation of suffering is attainable

4. The path to the cessation of suffering

Besides addressing the truths of our existence, the Four Noble Truths reminds us that we are all capable of ending life’s sufferings and escaping from the cycle of birth and death (Third Noble Truth). The Fourth Noble Truth identifies the way to do this, as taught by the Buddha. It shows us the path to realize the potential we each have within to attain the highest level of spiritual liberation. What is this path? The Buddha referred to it as The Eightfold Path, which is

Besides the Four Noble Truths and Eightfold Path, Buddhism can also be summed up by the words, “do no evil, cultivate good deeds, purify one’s mind”. To do no evil is to refrain from killing, stealing, lying, sexual misconduct, greed, anger, and ignorance. However, Buddhists must also actively encourage and perform good deeds. For instance, we avoid eating meat and encourage the freeing of lives. Instead of stealing, we give. Instead of lying, we must tell the truth, and be humble and considerate to others. Instead of engaging in sexual misconduct, we set high moral standards for our actions, speech, and thoughts.

All of one’s actions have consequences, determined by the person’s intentions. If we are motivated to hurt others by greed, for instance, our actions will produce negative results. In Buddhism, those outcomes may not occur immediately after the actions, or even in this lifetime. The consequences of our actions could affect us through subsequent lives, and the universal law that governs those actions and their consequences is Karma.  EH