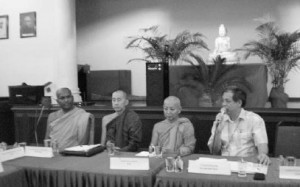 The Theravada Buddhim  Council of Malaysia (TBCM) was recently formed to represent the interests of Buddhist societies following the Theravada tradition. While the Tibetan Buddhists have the Vajrayana Buddhist Council of Malaysia (VBCM) and the Chinese Mahayana the Malaysian Buddhist Association (MBA) to represent their interests, the establishment of TBCM is a milestone in the history of Malaysian Buddhism for the Theravada Buddhist groups in Malaysia. Benny Liow interviewed Chim Siew Choon who was elected the first president of TBCM on September 1, 2012 for Eastern Horizon. Chim is a Founder Member of the Subang Jaya Buddhist Association (SJBA) and has been its President since 1992. Chim is also a Professional Mechanical Engineer and founder and CEO of Mega Energy Sdn Bhd.

Benny: You are elected the first President of the Theravada Buddhist Council of Malaysia (TBCM). Can you tell us how did the idea of TBCM was first mooted?

Who are the prime movers of this body – are they also in the main committee?

The Meeting on December 25, 2011 was chaired by Dr Tan Ho Soon (representing Nalanda Buddhist Society). Sangha Members who were present at the Meeting include Ven. Saranankara Maha Nayaka Thero, Ven. Dhammavuddho and Ven. Ratanasiri Thero. At that Meeting, a Pro-tem Working Committee headed by myself (representing Subang  Jaya Buddhist Association) and a Constitution Drafting Committee headed by Mr Don Premaseri (representing Sasana Abhiwurdhi Wardhana Society) were formed. The Constitution Drafting Committee prepared the Constitution for the TBCM with guidance from Ven. Aggacitta, Ven Saranankara and Ven Dhammavuddho. TBCM’s Pro-tem Secretary, Mr Tan Buck Soon (representing Bandar Utama Buddhist Society) applied to the Registrar of Societies (ROS) for registration of the TBCM. We received official approval of TBCM incorporation from the ROS on May 9, 2012.

The TBCM held its Inaugural Annual General Assembly on September 1, 2012 to elect its first Executive Committee for 2012/2014. A few of the participants of the December 25th Meeting are also in the current Executive Committee. Other prime movers of this body can be found in our TBCM website, www.tbcm.org.my How does a Buddhist society apply to join the Council? Are there criteria on what’s defined as a “Theravada society”?

Membership is open to all Buddhist organizations in Malaysia which accept and practice Theravada Buddhism and are registered with the ROS of Malaysia. Applicants need to fill in the prescribed membership forms (which can be downloaded from TBCM’s website) and submit to the Hon. Secretary,
who shall them bring to the Executive Committee for consideration and approval. A Theravada Society is
one which propagates the Teachings of the historical Buddha Gotama in accordance to the Pali Scriptures.

What about individuals who profess to practice Theravada Buddhism? How can they benefit from membership in the Council?

TBCM’s membership consists of only 2 categories, Ordinary Member and Associate Member. There is no membership for individuals.

What would be the main activities lined up by the Council for 2013?

For a start, we are now focusing our effort and attention on:

Once we have established ourselves in the above, we shall work together to move forward with more
proactive programs to strengthen the Buddhist missionary work in Malaysia.

Are there any issues of high priority that TBCM wishes to bring up to the attention of the Government, especially those affecting the Theravada Buddhist Community in Malaysia?

We are still new and in the process of establishing ourselves. For a start, we wish to avoid being bogged
down by various issues that can drain too much of our energy. Over the longer term, we shall map out
strategies to deal with such issues such as lack of land for religious and burial purposes, the need to
promote inter-religious harmony and understanding through the primary and secondary school education
system, etc. We wish to work together, as much as possible, with other national Buddhist organizations
in the Malaysian Buddhist Coordination Committee (MBCC) to deal with such issues.

How would the TBCM deal with bogus monks in Theravada robes who are becoming increasing common in wet markets and restaurants in Malaysia today?

We shall deal with this issue once we are ready. One strategy is to leverage on Dharma education.
Actually some Buddhist organizations such as Vihara Buddha Gotama, Nalanda Buddhist Society and
Taiping Insight Meditation Society (who are three of the prime movers of TBCM, have already regularly
organized Pindacara (alms round by the members of the Sangha) at various wet markets and other places
to create wholesome conditions for people to offer food dana as well as to educate the people what is
proper to offer when they see monks on alms-round. TBCM will publicize such an approach to educate the
public.

How will TBCM work with the other major Buddhist groups in the country such as the Malaysia Buddhist Association (MBA) and the Vajrayana Buddhist Council of Malaysia (VBCM)?

What is your personal vision for the Council since you are elected the first president of this
national body?

I share the collective vision of the prime movers of this Council for a united Buddhist Community, living
in peace and harmony while propagating Theravada teachings (doctrines compiled by the Elders of the
Order), practices and heritage. EH