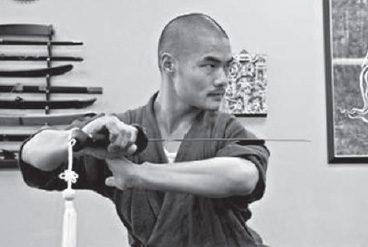 “If you see here,” explains the 24-year-old Shaolin Buddhist monk, dressed in a grayish-blue monastic robe, “this first cup of tea that I drink, I only have that cup of tea one time in my life, in that moment.”

This, he says, is called impermanence, or wuchang in Mandarin – one of the three marks of existence in Buddhism.

“Everything we do every day is changing and passing, getting old,” Wang explains.

By taking life moment by moment, he is able to relish each experience – old or new – with the same unfailing sense of novelty. And to fully realize and learn this concept of impermanence, one needs to master the art of discipline, a principle he became familiar with at the early age of three.

Nearly two years ago, Wang, whose students call shifu or master, opened something of an embassy to China’s monumental Shaolin Monastery here in the South Bay. Tucked between an animal clinic and a small Japanese steakhouse, Wang’s Shaolin Temple is currently home to more than 90 martial arts students, ranging in age from 4 to 78, learning traditional Shaolin-style Kung Fu, Tai Chi and Zen meditation.

Born in a rural village in Shandong Province, China, he recalls his earliest memory, at age 3: practicing Kung Fu with his older brother Wang Hui and his father, who was his first teacher. For five hours a day before and after school, young Wang trained with dedication.

“In the winter it’d be very cold, but we still trained outside,” Wang remembers. “Sometimes my father cried because he didn’t want to train us that hard.”

When Wang turned 8, his father sent him and his brother to the Shaolin village on Mount Song in central Henan Province, a six-hour car ride from home. The Shaolin village is home to many martial arts schools. At the heart sits the historic Shaolin Temple, a world-famous Buddhist martial arts monastery built in 495 A.D.

Wang and his brother continued to train, and about a year and a half later, they were accepted into the Shaolin Temple. Wang was handpicked as a disciple by Shifu Shi Yongxin, who now is the abbot, or head, of the Shaolin Temple. “You have to have certain skills and you have to pass certain tests,” Wang says, describing the extremely selective nature of the temple, “and most importantly, you have to have a special connection with Buddha.”

Thereafter began his 11-year residency in the monastery. “Life at the Shaolin Temple is very different from where we are today,” he begins, letting out his signature, close-lipped chuckle. “No matter what happens, what day, there is no special day because today is the most important day. Whatever’s the past is the past.”

For 11 years, he followed the same daily routine with several hundred other monks at the temple: wake up at 5:30 a.m., attend  hanting for two hours, eat breakfast at 7:30 a.m., study break for 20 minutes, followed by a two-hour Kung Fu training session. Post lunch at 11  a.m. came an hour-long break, followed by a study session of the Diamond Sutra and another two-hour Kung Fu training session. Then after dinner at 5:30 p.m., Heart Sutra chanting for an hour, meditation and bedtime at 10 p.m. “Discipline first,” he says, “then learn
Buddhism. Then you understand what life is. Then you understand what impermanence is. If a person doesn’t have discipline they cannot do anything.”

Those five to six hours of daily Kung Fu training turned into 10 or more hours when Wang began training for competitions. Wang, who  holds several first place and world champion titles, unexpectedly becomes sullen in tone when this topic comes up. “I’ve been to many competitions. I won many times and lost many times,” he says matter-of-factly. He explains that competition was just a part of his experience in Kung Fu, a mere activity and nothing more. “It was not something that encouraged my life. Being in competition gave me a lot of ego at the time. I was not happy and was struggling.”

What did enrich his life was partaking in the world tour of “The Wheel of Life,” a series of Kung Fu, drama and Tai Chi performed by the Shaolin monks.  For three years, Wang performed throughout Europe, Australia, Canada and the United States.

Serving as a spiritual ambassador for both China and the Shaolin Temple, Wang has met his share of prominent political figures, including Queen Elizabeth, for whom he performed in 2011, and  Russian President Vladimir Putin, with whom he shared lunch in 2007.

“It’s not really political – it’s a cultural exchange,” Wang explains. “Culture has no boundaries, especially if it’s something positive. No one will refuse love. You bring something positive; whether they take it or not, that’s their choice.”

It’s the same reason why he is here today. In 2008, Wang moved to Huntington Beach, where some friends lived, and began teaching classes in community centers, parks and schools. A dedicated following emerged, which prompted Wang to open his Shaolin Temple in the summer of 2011. In addition to teaching five hour-long classes a day, Wang trains his three instructors and manages the
studio as its sole owner.

Damon Webber, a longtime Kung Fu practitioner who teaches beginning Tai Chi classes, explains that Wang’s wealth of knowledge and wisdom, in addition to his jaw-dropping prowess in Kung Fu, makes him invaluable. “He’s what we’ve been waiting for, in a sense,” he says, “for a teacher to come down from Shaolin.”

Wang has yet to visit the temple grounds back in China since opening his studio. He adds with a chuckle that he’ll return as soon as he’s not too busy.

“The temple is a place of purity, a pure land,” Wang explains. “What we learn in the temple is the heart. You move the heart to another place. You come to a busy place and still keep a peaceful heart. That’s what Buddhism is. You learn, then you pass that knowledge to more people.”