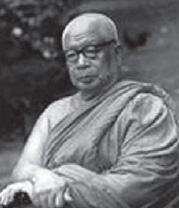 Buddhadasa Bhikkhu became a monk in 1926, at the age of twenty. He is best known for establishing Suan Mokkh Monastery for the practice of vipassana meditation in 1932 in southern Thailand. Ajahn Buddhadasa worked painstakingly to establish and explain the correct and essential principles of what he called “pristine Buddhism,” that is, the original realization of the Buddha before it was buried under commentaries, ritualism, clerical politics, and the like. His work was based in extensive research of the Pali texts, especially of the Buddha’s Discourses (Sutta Pitaka), followed by personal experiment and practice with these teachings. Then he taught whatever he could say truly quenches dukkha (dissatisfaction, suffering). His goal was to produce a complete set of references for present and future research and practice. His approach was always scientific, straight-forward, and practical. Although his formal education only went as far as ninth grade and beginning Pali studies, he was given five Honorary Doctorates by Thai universities. His books, both written and transcribed from talks, fill a room at the National Library in Bangkok. Doctoral dissertations are still
being written about him and his legacy.

Progressive elements in Thai society, especially the young, were inspired by his teaching and selfless example. Since the 1960’s, activists and thinkers in areas such as education, ecology, social welfare, and rural development have drawn upon his teaching and advice. Most of the monks involved in nature conservation and community development were inspired by him. He provided the link between the scriptural tradition and engaged Buddhist practice today.

After the founding of Suan Mokkh, he studied all schools of Buddhism, as well as the other major religious traditions. This interest was practical rather than scholarly. He sought to unite all genuinely religious people in order to work together to help, as he put it, “drag humanity out from under the power of materialism.” This broadmindedness won him friends and students from around the world, including Christians, Muslims, Hindus, and Sikhs. Ajarn Buddhadasa died in 1993 after a series of heart attacks and strokes.

To call something “a fundamental principle of Buddhism” is correct only if, first, it is a principle that aims at the quenching of dukkha (suffering) and, second, it has a logic that one can see for oneself without having to believe others.

The Buddha refused to deal with those things that don’t lead to the extinction of dukkha. He didn’t discuss them. Take the question of whether or not there is rebirth after death. What is reborn? How is it reborn? What is its “karmic inheritance”? These questions don’t aim at the extinction of dukkha. That being so, they are not the Buddha’s teaching nor are they connected with it. They don’t lie within the range of Buddhism. Also, the one who asks about such matters has no choice but to believe indiscriminately any answer that’s  given, because the one who answers won’t be able to produce any proofs and will just be speaking according to his own memory and feeling. The listener can’t see for himself and consequently must blindly believe the other’s words. Little by little the subject strays from dharma until it becomes something else altogether, unconnected with the extinction of dukkha.

Now, if we don’t raise those sorts of issues, we can ask instead, “Is there dukkha?” and “How can dukkha be extinguished?” The Buddha agreed to answer these questions. The listener can recognize the truth of every word of the answers without having to believe them
blindly and can see the truth more and more clearly until he understands for himself.

There aren’t that many fundamental, or root, principles of dharma. The Buddha said that his teaching is “a single handful.” A passage in the Samyutta-nikaya makes that clear. While walking through the forest, the Buddha picked up a handful of fallen leaves and asked the monks who were present to decide which was the greater amount, the leaves in his hand or all the leaves in the forest. Of course, they all said that there were more leaves in the forest, that the difference was beyond comparison. Try to imagine the truth of this scene; clearly see how huge the difference is. The Buddha then said that, similarly, those things that he had realized were a great amount, equal to all the leaves in the forest. However, that which was necessary to know, those things that should be taught and practiced, were equal to the number of leaves in his hand.

From this it can be seen that, compared to all the myriad things in the world, the root principles to be practiced for the complete  extinction of dukkha amount to a single handful. We must appreciate that this single handful is not a huge amount; it’s not something beyond our capabilities to reach and understand. This is the first important point that we must grasp if we want to lay the foundation for a correct understanding of the Buddha’s teachings.

The saying of the Buddha that deals with the practice regarding shunyata (voidness) is the saying that is the heart of Buddhism. It requires our careful attention. “Nothing whatsoever should be clung to as ‘I’ or ‘mine.’” (Sabbe dhamma nalam abhinivesaya.) The
Buddha himself declared that this is the summation of all the Tathagata’s [Buddha’s] teaching. He said that to have heard the phrase “Sabbe dhamma nalam abhinivesaya” is to have heard everything; to have put it into practice is to have practiced everything; and to have reaped its fruits is to have reaped every fruit. So we need not be afraid that there is too much to understand. When the Buddha compared the things that he had realized, which were as many as all the leaves in the forest, with those that he taught his followers to practice, which were a single handful, the single handful he referred to was just this principle of not grasping at or clinging to anything as being self or as belonging to self.

“This practice is every practice.” Can you think of anything that remains to be practiced? In a given moment, if a person – whether Mr. Smith, Mrs. Jones, or anyone at all – has a mind free of grasping and clinging, at that moment, what does the person have? Please think it over. We can see that the person has attained all the traditional practices: the Triple Refuge (“tisarana”), giving (“dana”), virtuous conduct (“sila”), meditation (“samadhi”), the discernment of truth (“panna”), and even the path-realizations, their fruits, and nibbana.

At that moment of non-grasping, one has certainly attained the first practice, that of the Triple Refuge. One has reached the Buddha, the Dhamma, and the Sangha, for to have a heart free of the mental defilements and dukkha is to be one with the heart of the Triple Gem. One has reached them without having to chant “Buddham saranam gacchami” [“I take refuge in the Buddha”]. Crying out “Buddham saranam gacchami” and so on is just a ritual, a ceremony of entrance, an external matter. It doesn’t penetrate to the Buddha, Dhamma, and Sangha in the heart. If at any moment a person has a mind void of grasping at and clinging to “I” and “mine,” even if only for an instant, the mind has realized voidness. It is one and the same as the heart of the Buddha, the Dhamma, and the Sangha.

The next practice is giving (“dana”). The meaning of giving is to let go, to end all grasping at and clinging to things as being “I” or “mine.” At the moment that one has a mind void of ego-consciousness, then one has made the supreme offering, for when even the self has been given up, what can there be left to give? Thus, at any moment that a person has a mind truly void of self, when even the self has been completely relinquished, he or she has developed giving to its perfection.

To move on to virtuous conduct (“sila”), one whose mind is void and free of grasping at and clinging to a self or possession of self, is one whose bodily and verbal actions are truly and perfectly virtuous. Any other sort of morality is just an up-and-down affair. We
may make resolutions to refrain from this and abstain from that, but we can’t keep them. Whenever the mind is void, even if it’s only for a moment, or a day, or a night, one has true“sila”for all of that time.

As for concentration (“samadhi”), the void mind has supreme samadhi, the superbly focused firmness of mind. A strained and uneven sort of concentration isn’t the real thing. Only the mind that is void of grasping at and clinging to “I” and “mine” can have the true and
perfect stability of correct concentration. One who has a void mind always has correct samadhi.

The next practice is “panna” (intuitive wisdom). Here we can see most clearly that knowing sunnata, realizing
voidness – or being voidness itself – is the essence of wisdom. At the moment that the mind is void, it is supremely keen and discerning. When a mind is void of foolishness, void of “I” and “mine,” there is perfect knowing, or panna. So the wise say that sunnata and panna (mindfulness and wisdom) are one. Once the mind is rid of delusion, it discovers its primal state, the true original mind.

We can go on to the path-realizations, their fruits, and nibbana. Here the progressively higher levels of voidness reach their ulmination in nibbana, which is called the supreme voidness (“parama-sunnata”).

Now, you may see that from taking refuge and progressing through giving, virtuous conduct, concentration, and wisdom, there is nothing other than sunnata, or non-clinging to self. Even in the pathrealizations, their fruits, and nibbana, there’s nothing more than voidness. In fact, they are its highest, most supreme level.

Adapted from “Heartwood of the Bodhi Tree: The Buddha’s Teaching on Voidness”, by Buddhadasa Bhikkhu, Boston: Wisdom, 1994 EH