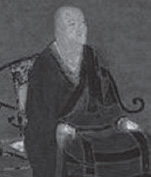 Dōgen Zenji 道元禅師 (19 January 1200 – 22 September 1253) was a Japanese Zen Buddhist teacher born in Kyōto. He founded the Sōtō school of Zen in Japan after travelling to China and training under Rujing, a master of the Chinese Caodong lineage. Dōgen is known for his extensive writing including the Treasury of the Eye of the True Dharma or Shōbōgenzō, a collection of ninety-five fascicles concerning Buddhist practice and enlightenment

When you ride in a boat and watch the shore, you might assume that the shore is moving. But when you keep your eyes closely on the boat, you can see that the boat moves. Similarly, if you examine myriad things with a confused body and mind, you might suppose that
your mind and essence are permanent. When you practice intimately and return to where you are, it will be clear that nothing at all has unchanging self.

Great enlightenment right at this moment is not self, not other.

Great enlightenment is the tea and rice of daily activity.

From The Essential Dogen: Writings of the Great Zen Master edited by  Kazuaki Tanahashi and Peter Levitt © 2013. Reprinted with permission of Shambhala Publications. EH