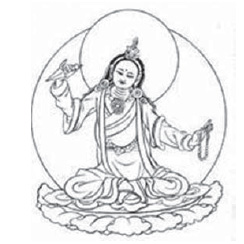 What is a Dakini?

Michaela Haas, PhD, is an international reporter, lecturer, and consultant (www.michaelahaas.com). She is the owner of HAAS live!, an international coaching company which combines her experience in media with mindfulness training. With a PhD in Asian Studies from the Rheinische-Friedrich-Wilhelm-University, Bonn, Germany, she is currently a visiting scholar in Religious Studies at the University of California Santa Barbara. She has been studying and practicing Buddhism for almost twenty years. Since the age of sixteen, she has worked as a writer and interviewer for major nationwide German newspapers, magazines and TV stations including hosting her own successful nationwide talk show. She writes for the Washington Post and the Huffington Post. Michaela divides her time between Malibu, USA, and Munich, Germany. Her most recent book is Dakini Power which is featured in this issue of Eastern Horizon. This interview is a introduction to the book Dakini Power.

Q: What is a dakini?

A: In short, a dakini is a female messenger of wisdom. Tibetan Buddhists have a unique definition of the dakini as a role model of female enlightenment. The dakinis are depicted as strong and fiercely independent. The Tibetan word for dakini, khandro, literally means
‘sky-goer’, and it hints at the expansiveness of their view. I find this very interesting. All the female masters I met are extremely compassionate, warm, and kind, with very soft and tender hearts. At the same time, they also seem to have backbones of steel.

Q: Why did you decide to write the book Dakini Power?

A: After studying Buddhism for some years I realized that I never met any female masters. Whether at the university or in more traditional circles, the teachers always happened to be men. So, where were the women? I became curious and sought them out. Of course they existed, but they just weren’t as much in the limelight. I was even more surprised when I couldn’t find a book that features the most accomplished women of the Tibetan Buddhist tradition in the West. Traditionally, dakinis don’t teach so much through words, but very much through their being and their way of life. So it seemed fitting to focus on the female masters’ lives, how they dealt with challenges, what motivated them to move forward. I find the examples of these courageous women extremely inspiring.

Q: What do you find inspiring about their life stories?

A: So many people dream of finding more meaning in their lives, but very few actually get around to doing something about it. The women in the book are different. Take Elizabeth Mattis-Namgyel, for example. There she was, the young daughter of a rambunctious Marxist record label manager in Santa Monica, California, falling in love with a very traditional Tibetan Lama who had just disrobed. Or Chagdud Khandro – how did this Texan woman get from working as a tough journalist in New York to becoming a spiritual master in Brazil? Or Thubten Chödron – she used to be Cherry Green, a good Jewish girl in California, now she’s the abbess of a traditional Tibetan monastery in Washington State. Now, that’s a clash of cultures! But in a bigger way, this is what happens with Buddhism coming to the West. Both cultures have to explore what is essential to their survival, where they get bent out of shape if they change, and where they have to be flexible and adapt in order for the two cultures to communicate, so that it becomes a beautiful dance. But it is also a flexibility test for everybody involved, no doubt.

Q: Did you find any differences with male teachers?

A: Traditionally, male teachers are recognized as toddlers, being put on a throne and educated in a very challenging monastic training. This is wonderful, but certainly very far removed from Westerners’ experience of life. Many of the women in the book had an upbringing in the midst of life, and so their experience of life is much closer to my own. In this way, I can relate to them much more and I experience them as role models. Dagmola Sakya had to raise five kids and manage the whole household while having a 9-to-5-job at a blood bank. This is a struggle modern women can relate to. If you ask her a question about how to practice while keeping a challenging job, she does not need to put herself in your shoes – she’s actually been there. That women take their seats as equals is probably the single most important change of Buddhism coming to the West.

Q: How did you choose the subjects for the book?

A: Every woman illustrates at least one crucial aspect of Buddhism in the West. Pema Chödron, for instance, is simply the most successful female Buddhist teacher in the West, and her books are groundbreaking; Khandro Rinpoche has a unique status as a young female master and incarnation; Jetsunma Tenzin Palmo is such a heartwarming example of an English woman sitting in a cave in the Himalayas for 12 years with unwavering determination; Lama Tsultrim Allione is the author of a milestone research on female mystics. If any of them weren’t included, I’m sure everybody would ask – why didn’t you talk to them? But there are many more that I could have included. For instance, Dagmola Sakya and Jetsun Kusho Luding have very similar life stories – they both were born in pre-Communist Tibet, both have five sons, both had to earn a living working blue collar jobs in America. I could have included either one of them, but felt their biographies were too similar to include them both. In this case, the choice was personal: I have an ongoing student-teacher relationship with Dagmola, she calls me her “Dharma daughter”, and I felt that in order to justify publishing their biographies, I had to get “close” enough to the teachers to tell the readers something new or more personal, something they won’t find on the internet.

Q: How did you meet Buddhism?

A: Buddhists say that some meet the teachings out of suffering, some meet it out of happiness. I had a great staff position as a reporter at Germany’s most renowned daily newspaper, the German equivalent of the New York Times. At the same time, I had my own TV show, a popular 90-minute live talk show – and all this at the age of 23. I was driving around Munich in my beloved sky blue Old-timer Mercedes convertible, which I called Cloud Nine – I had it all. Yet I wasn’t happy. There was a nagging dissatisfaction, but there was nothing else I could have wished for. Everything was perfect, yet I was depressed. So I knew I had to look on an entirely different level. Then I took a trip to Bhutan – not because I knew anything about Tibetan Buddhism, but because it was exotic. The trip was mind-blowing; I connected with the culture at a very deep level. I kind of spent the whole two weeks in an altered state of mind. Whe  I came back, I sought out a Tibetan Buddhist teacher and within six months, I left both my jobs in TV and the paper. Since then, I have continued to work as a reporter, but my whole focus shifted. For a while I became a full-time Buddhist, studied in India and Nepal for
some years and eventually did a Ph.D. in Asian studies.

Q: In your book you raise some controversial issues about sexism and sexuality.

A: I think it is crucial not to gloss over the issues, and this was the advice my teacher Dzigar Kongtrul Rinpoche gave me for the book. Himalayan societies are highly hierarchical; I experienced some traditional teachers as quite patriarchal and dogmatic. I come from a culture where I am used to discussing issues very openly and directly, even bluntly. This is the opposite of the face-saving tiptoeing in the Asian culture, so I admired that the women were willing to discuss things very openly, non-dogmatically. With Buddhism coming to the West, the traditional teachers are opening up more and their communities are slowly becoming more democratic, but it is still a
process in the making.

Q: Why did you decide to make it a very personal book?

A: Well, both as a journalist and as a scholar, I am trained to highly value “objectivity.” But we all know that it is impossible to be objective, and I think in the end it is more honest to just be open about that. It is easy to forget how utterly exotic and different these life stories sound for non-Buddhists. My non-Buddhist friends and colleagues wanted me to translate for them, to be the catalyst. Since this book is meant to be an inspiration for Buddhists and non-Buddhists alike, I decided to try to make it as easily accessible as possible and I followed my publisher’s encouragement to make it personal. My main objection about this approach was that people might feel I put myself on the same level with the women I write about which is laughable. So, I try to make it utterly clear that the book is my humble homage to these remarkable and inspiring teachers. As my publisher said, one way to be egoless is just to put yourself out there.

Q: What did you learn from the interviews?

A: So much! Too much to list. You have the whole spectrum: Women who decided to become ordained, mothers and scholars, wives and hermits, but they all decided to focus on their spiritual realization, so there is something to learn from every single one of them. After my initial honeymoon period with Buddhism had waned, I had some serious questions about how this age-old tradition would fit with my modern upbringing, so it was immensely valuable for me to ask some of the women how this was working out for them. Some of them are very traditional and say, what are you talking about? No, this tradition is not patriarchal at all. Others are very feminist
and outspoken. I feel that there are many paths for women to choose in this tradition. Most of all, I learned that you never give up. You just do what you’re meant to do. That is inspiring!

Q: What are you working on next?

I am working on a book about the gift of pain – what we can learn from emotionally and physically painful situations and experiences. For the book, I am interviewing people who emerged from challenging situations stronger, more compassionate and wiser. I want to know: Why is it that the same situation breaks some people, while others seem to survive with a renewed purpose and meaning in life? I have also just written a docudrama about the Tibetan resistance – but with China financing a lot of movie productions these days, this is going to be a hard sell if we don’t find independent financing. EH