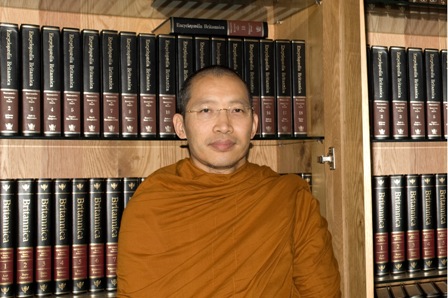 Can a Buddhist Be a Wealthy Man?

It is generally perceived that a monk is the symbol of living Buddhism. A monk leads a simple way of life;  as a part of his ordination, he takes a vow of poverty and lives a homeless and chaste life; he engages in no commerce but lives on others’ generosity. That the monk, or the Sangha as the community of monks is called, has been the positive representation of the Buddha’s teaching is attested by the 2500 long history of Buddhism. It has been the Sangha that preserves the Dhamma, as the teaching of the Buddha is generally known. It is to the monk that a lay Buddhist looks for spiritual guidance. In short, a big picture of Buddhism drawn from this important symbolism is that overwhelmingly Buddhism does not encourage accumulation of wealth and enjoyment of material life.

And, generally, a practicing Buddhist knows that Buddhism teaches the virtue of non-attachment. The goal of Buddhism, nirvana (nibbana), is the complete overcoming of attachment (also hatred and illusion), considered by the Buddha to be the psychological root(s) of human problems, dukkha. Nirvana, the achievement of liberation, and the extinction of attachment (hatred and illusion) are therefore one and the same thing. So, how can a true Buddhist justify his accumulation of wealth?

This question is by no means confined to non-Buddhists. Recently a Buddhist working for the BBC asked me if there would be any worldly progress if everybody were to focus on getting rid of attachment (hatred and illusion). This indicates his own perception that a path to overcome attachment and an effort to achieve worldly progress such as accumulating wealth are, indeed, poles apart. This perception must have persisted in the Buddhist community for quite a while so that usually Buddhists are not familiar with the “economic virtues of saving.”

To solve this problem, the first question we have to ask here is if wealth is considered evil by the Buddha. The answer is, no. So, “for Buddhism, wealth is not evil” and in fact has no moral value in itself. In other words, wealth is morally neither wholesome nor unwholesome. In fact, far from being evil, wealth is regarded as essential for a peaceful society, in which encouraging environments exist for one to make steady progress on the spiritual path. If anything, poverty is condemned. The Buddha says the greatest illness is hunger. It has affected the greatest number of people on earth and for as long as human society itself.

The Buddha states that poverty increases crimes, leading to general moral decline. Major causes for an increase in poverty are lack of economic prosperity and lack of proper redistribution of wealth. Failure on the part of the ruler to address these problems will lead to an increase in poverty-related crimes such as theft. As a result, the criminal as well as the possessor of wealth will arm themselves for their own protection. Thus, stealing and killing may be widespread. Such a breakdown of law and order in a country will give rise to anxiety. And, that will have an impact on people’s quality of life. People will not be inclined to observe even basic Buddhist moral precepts. If that happens, life spans will be getting shorter and shorter.

What May Be Good or Evil?

If wealth itself is not evil, what may be unwholesome or even evil is how it is made, the way it is used and indeed our attitude towards it. One should acquire wealth “in a moral way, without violence”. The Buddha praises righteous earning and hard working. Earn with one’s own sweat and righteously is the advice he often gives. “If he does not wish for his own prosperity by unfair means, he certainly is virtuous, wise and religious.”1 After all, the ‘right livelihood’ is an indispensable part of the path towards nirvana. In using what one earns, what is praiseworthy is when it is used not only to “give ease and pleasure to oneself”2  but also “to share it with others, and to use it for generous, and karmically fruitful action”. Here wealth is used to ease suffering, physical or psychological, in oneself as well as in others. Being generous to others is seen here as being part and parcel of boosting one’s own good karma. Make it properly and use it properly are the Buddhist concerns here.

How much should one accumulate then? There is no upper limit imposed by any of the Buddhist precepts; but what is pointed out as a necessary virtue for one to enjoy life is contentment. One may earn as much as one can so long one does so “in a moral way, without violence”. And, contentment here does not mean that one stops earning after a certain degree of wealth is accumulated. Instead, it means to enjoy using one’s wealth to benefit oneself, and then family, parents and relatives, and at last if it is within one’s means also the society at large. However, not everyone who has plenty of wealth is able to enjoy it: they feel empty at heart, restless at home and have to seek pleasure in material things, one after another. They buy a lot more than they need.

This shows they enjoy none of what they have got; instead, they still think that it is what they have not got that will give them satisfaction. This is an illusion. This is not a contented mind. They lose sight of their purpose in making wealth. Possession becomes rather an obsession than a security.

Contentment gives one an ability to happily use what has been earned and to share it with others. So, contentment is an asset of the mind. Without contentment, one may become a slave of greed. Contentment is synonymous with simple living. Despite his enormous wealth, a contented person makes no fuss nor much complaint in enjoying things. He is able to enjoy every bit of his life. This is all about
the right attitude towards wealth.

What About Non-Attachment Then?

With all the praise of wealth and enjoyment, how can a Buddhist develop non-attachment? First of all, Buddhism does not equate poverty with contentment, let alone non-attachment. That said, the practice of non-attachment starts with sharing. This should be done at the individual, family and societal levels. Looking after one’s family, parents and the needy are some of the common ways to practice non-attachment. Paying taxes and not cheating are also an integral part. Sharing one’s wealth with others is considered important not only for its social and economic value but also for its religious significance.

Every Buddha has to have perfected this practice of giving before they can achieve enlightenment. Indeed, giving is a part of everybody’s salvation. Giving is appreciated in the context of ‘Self-Conquest and Self-Control’. Through giving, one conquers meanness with generosity and love.3 In other words, through sharing what has been earned, one accumulates other spiritual qualities, for instance, a good moral conduct and wholesome mind. These qualities help advance the spiritual path of a Buddhist layman.

The practice of sharing often leads a Buddhist to give more than his means. He saves little. This is due to a lack of awareness of the need to use wealth wisely. “Leading a balanced life” and not indulging in unnecessary things, either for oneself or for others, are two of the most frequent admonitions of the Buddha to a lay Buddhist. A balanced life means to be realistic about one’s income and expenses. In one place, the Buddha even says that one should not spend more than a quarter of one’s salary.

While a quarter of the income should be saved, half of the whole income should be reinvested. Whatever the amount specified by the Buddha, his message is that saving is very essential for worldly and spiritual advancement in the long term.

Saving is also made possible by following some moral and simple way of life. Precepts urging Buddhists to avoid “strong drink, drugs… haunting the street at unfitting times, attending fairs, being addicted to gambling, keeping bad company, and habitual idleness” are to help one not to indulge; and the same time, of course, they also help save money.

It is clear that lay Buddhists are advised to work hard so that they meet their needs and fulfill their family and social responsibilities. The accumulation of wealth is necessary not only for those responsibilities but also for progress towards nirvana i.e. the ultimate religious goal itself. Thus, for a society, the Buddha emphasizes the indispensability of both wealth and morality. They are compared with two eyes in a person. The loose one of them only impairs his vision.

So, to lead a family life and lack either wealth or morality is like to lose one’s eye, a vital organ. For those who have renounced the world, the monks, though, personal possessions must be minimal, limited to only some essentials. The rest belong to the community. A monk’s life is designed to enhance his speedy progress towards enlightenment. Joining the ordained community is a personal choice. Once this special way of life is chosen, one strives not for economic productivity but for complete nonattachment.

While the life of a monk remains ideal, for a lay Buddhist, his aim is to earn and to earn well and righteously. To do so is strive not only for economic prosperity here and now but also for the spiritual achievement itself. For his efforts contribute to the removal of suffering, the only purpose for which the Buddha says he ever teaches. In brief, “Whatever is of help to the attainment of nirvana is good, and whatever is detrimental to the attainment of nirvana is bad.”4 And wealth must be made and used as a beneficial instrument, not a detriment, in the process of achieving enlightenment. Then, perhaps, the richer a Buddhist becomes the nearer he is to his goal. EH