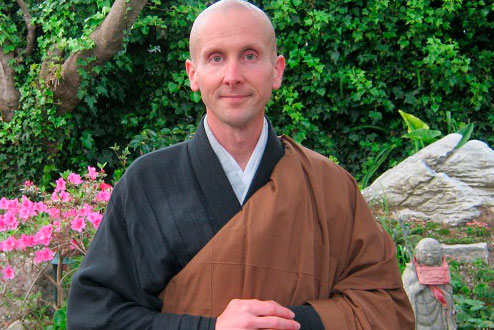 Kokyo Henkel (born 1966) trained for 19 years in residence at Tassajara Zen Mountain Center (most recently as Tanto, or Head of Practice), Green Gulch Farm Zen Center, No Abode Hermitage in Mill Valley, and Bukkokuji Monastery in Japan. He was ordained as a priest in 1994 by Tenshin Anderson Roshi, receiving Dharma Transmission from him in 2010. Kokyo came to Santa Cruz Zen Center in 2009, where he is currently Head Teacher.

Karma is a term that arose in India before the Buddha lived. It literally means “action” or “activity,”  particularly “intentional activity.” The Buddha said that karma is defined as intention, voli tion, or will. Karma can take three forms: body, speech and mind. We do intentional activities with body and speech, which are based on intentions of mind. There are also actions of body, speech, and mind that are not karmic because they are not intentional: When you go to the doctor and he hits your knee with a little hammer to test your reflexes, your leg goes up. That’s a bodily action that’s not intentional; you don’t have to decide to do that. Also our heart beating and our breath moving in and out are not karmic activity.

Karma also gets classified in terms of wholesome or unwholesome. Wholesome or harmless actions of body, speech, and mind lead to more pleasant results, and unwholesome or harmful actions lead to unpleasant results. Greed, hate and delusion produce certain kinds of karma, and non-greed, non-hate, and non-delusion produce different kinds of karma, and therefore different kinds of karmic effects. Karma is a cause and every karmic action has an effect. It is quite astounding and sobering to contemplate how every intentional thought that arises has an effect on this world.

Therefore an important part of practice is to examine that process, to pay attention to our intentions and what we are doing, and notice the effects of what we are doing; this seems pretty simple on the surface, but hard to do a lot of the time, hard to remember to do. We like to just do karmic activity and not pay much attention to the effects. It’s an important and challenging practice to watch more and more carefully the effects of all of our thoughts, speech, and physical actions. Often we can’t see all of the effects, but we can watch the process. We could even say that one aspect of zazen is attending to karma, being present with our intentions.

Another aspect of karma is that it is the intention of a sentient being who perceives him or herself as an individual independent self, as a particular “me.” The sense that there is somebody doing the action, an “intender,” is part of what is meant by karma. There is the sense of a “self ” that is doing something. One could be just sitting zazen without that sense of self doing something; breathing is happening and even mental activity is happening, like noticing the sound of a bird without the sense that “I am noticing the sound of a bird.” However if we think, even very subtly, “I’m going to pay attention to this sound,” now that’s karmic activity. Karma involves the sense or thought that “I” am in control or doing something.

Buddha’s teaching is that the “actor” or “intender” is really just an illusion. We can see that actions are happening, and we have the strong sense that somebody is doing them, but Buddha teaches that if we really look for that someone, we’ll just find different mental fac tors, different aspects of mind that are constantly arising and ceasing. But we won’t find any “doer.” One of the things we might find, if we are looking for a doer, is the mental factor called “intention.” It’s a factor that is present with every
experience, but not it’s not “me” or “my” intention.

This naturally brings up the question of free will. As someone who hasn’t studied a lot of Western philosophy, I just looked up free will in the dictionary. Free will is “the freedom of humans to make choices that are not determined by prior causes or by divine intervention.” We don’t talk much about divine intervention in Buddhism, but we definitely talk about prior causes. So, if we go with that definition, it doesn’t look like there is free will in the view of Buddha-Dharma because everything that happens, including “choice” is determined by conditions.

Volition is a mental factor that arises dependent upon conditions, which is precisely what makes it not an independent self. If there were an independent self, then it could have free will, and in fact that’s what we feel to be true as humans. We believe that “I” as a free agent can, within the limits of conditions imposed by the world, decide what
to do now. Don’t we think so? Free will may sound like a really great thing to have, but it seems to me that it would be kind of a burden to have free will.

A question you can contemplate is: If it feels like “you” have to decide anything, do you feel a little bit of unease with that “freedom” of so-called free will? If you open to the possibility that the boundless totality of conditions is determining your every move, that your “self ” is receiving its function from myriad conditions, do you feel some ease with that sense of “being controlled”?

The opposite of free will is determinism. Here’s the dictionary definition: determinism is “a theory that acts of the will, occurrences in nature, or social and psychological phenomena are causally determined by preceding events.” This sounds to me a lot like Buddha’s teaching of dependent arising.

We could add that we are not talking about “strict” determinism; this would mean that every time I yell at a person, it means they are not going to talk to me tomorrow, no matter what – one karmic cause would always lead to the same karmic effect. Buddha-Dharma is not like that actually. In the view of dependent arising, it means there are many other conditions involved as well; like that person is in a really good mood today so, even though I yelled at them yesterday, they’re happy to talk with me today. I think that often we don’t look at this issue so deeply. Without looking deeply, it seems like in the middle of the depend ently arising universe there’s this one free unconditioned agent that has the choice to do what it wants; there are many conditions arising, but “I” as the “decider” am the one exception.

If we want to posit free will, we have to ask whose free will it would be. So the very fact that we practice or don’t practice, do wholesome activities or harmful ones, is completely conditioned. And this is one of the most awesome, maybe frightening or depressing, possibly joyfully liberating, insights we can have – depending upon our conditioning. We can say, “I can decide to make more effort.” But not really! And yet we may find this body and mind making more effort… and that is the wonderful thing about Buddha-Dharma, that it feeds on itself through conditionality, so that once we get into it, it starts to condition us in a new positive kind of way, without any actual “self” needed to do the work. The only thing really needed is paying close attention to how the process actually works – and of course the intention to pay attention will arise or not according to conditions; and hearing such a teaching is one of the conditions!

However we are left with the problem that if all decisions are simply determined by conditions, then who’s responsible? Responsibility is moral accountability, which is a basic human convention. Since we live in a world where people do believe in free will, then we agree to go along with this conventional appearance; if other people believe I am a “self” with actual free will and that I am responsible for my actions, then as a bodhisattva I would vow to go along with them. A bodhisattva is one who is willing to play the game of appearing as a sentient being who is in control of herself and living in accord with other sentient beings, completely willing to receive the effects of karma, even though ultimately the set of conditions we called “me” that did the action is not the same set of conditions called “me” that receives the result.

The freedom of the bodhisattva is that by seeing the illusory nature of free will, they are willing to receive whatever effects come. Also, since they are no longer so concerned about their limited “self”, they don’t take advantage of others; they don’t say, “Since I’m not in control, I’ll hit you.” They don’t cause harm, since intentionally harming others always comes from thinking there is a self that is in control and must meet its needs even at the expense of others. In Zen it is not said that a person of great practice no longer falls into cause and effect; it’s that they no are no longer blind to cause and effect, they are always aware of conditionality, which makes them quite harmless and quite beneficial to others. EH