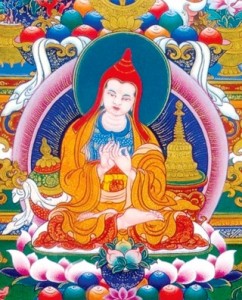 Buddhism in Indonesia: The Resplendent Revival of a Golden Lineage

“In this Land which is blessed by the Past, Present and Future Buddhas, stand firm the sanctuary of The Victorious Sakyamuni’s teachings. In this same place, we are walking the excellent path of the Great Tsongkhapa and following the lamp of the path of Atisha Dipankara Sri Jnana, the most precious spiritual son of Guru Svarnadwipa, with the aspiration to become the lamp to expel the darkness of all beings and to put them on the greatest joy of nirvana” – Kadam Choeling Indonesia.

From the 4th to the 15th century, Sriwijaya and Majapahit were widely recorded as two of the most prominent superpower kingdoms in South East Asia. At that time the powerful rajas of Sailendra ruled as absolute monarchs over the extensive regions of the southern seas: from the coasts of Cambodia and Vietnam, through the islands and peninsulas of Indonesia and Malaysia, up to the Maldives and the Locatives and the Sunda Strait. The unheard history of the existence of a Supreme Master of Guru Serlingpa Dharmakirti from Suvarnadwipa or the Land of Gold (now known as Sumatera, Indonesia) seems to provide answers to the missing links in the annals of the spread of Tibetan Buddhism in the world.

The Life of Lama Serlingpa

The life of Lama Serlingpa resembles the life of Prince Siddharta (Buddha Sakyamuni). He was well raised in a royal Buddhist kingdom. With all the luxurious facilities and the wealth of his family, none interest him more than learning the Dharma. In his search to find his spiritual Guru, the young prince took to the seas in the direction of India. Amongst all teaches he met, he finally felt deep admiration and devotion to his utmost beloved teacher, Sri Maharatna. He learned major Buddhist texts intensively for seven years before he finally decided to devote his life to attain enlightenment by becoming an ordained monk in Vikramasila Monastery.

Thus he became the perfect holder of the two most important lineages for the development of  bodhichitta,the spontaneous mind of enlightenment. The first one is ‘seven causes and result’, passed down from Maitreya to Asanga and the second lineage called ‘equalizing and exchanging oneself with others’ passed down from Buddha Manjushri to Shantideva. Thus Lama Serlingpa became the holder of these combined lineages and the related commentaries.

Subsequently he composed a large number of works, some of which have reached us through the Tengyur. He founded and substantiated the philosophical views of the Chittamatra School. The most important one of these still is his commentary on the Abhisamayaalankara (The Ornament of Clear realization), based on the commentary written by the scholar Haribhadra on the text of Chandrakirti. It is a magisterial treatise in which Lama Serlingpa explains and elaborates the hidden meaning of Prajnaparamita Sutra, describing the entire journey from generation of Bodhicitta to attainment of full omniscience.

After attaining full realization in India, Lama Serlingpa returned to his island Sumatra to work there for the Dharma. He came to live in the Vihara of Vijayanagar, the House of the Silver Parasols and started teaching there. His wisdom and personal realizations were known throughout the world. Students flocked to receive teachings from him. Because his love for beings was immense and the Sanskrit term for love is maître he was given the name Maitri or Maitreya.

The Link between Lama Serlingpa, Atisa Dipamkara and Dagpo Rinpoche From the 5th to the 12th CE, Buddhism flourished in India as evidently shown with the prominence of Nalanda University’s Great Bodhisattavas, Adepts, Pandits and other great master in India. One of the most renown teacher at that time was Atisha Dipamkara Srijnana. He studied with many highly accomplished teachers and became extremely well versed in all systems of tantra practice. However, His vajra master Rahulagupta reminded him that to reach enlightenment, he must train to develop caring love, compassionate sympathy, and a bodhichitta aim totally dedicated to benefiting others and to achieving enlightenment. Then, Atisha heard the profoundness of Serlingpa Dharmakirti’s understanding of Bodhicitta.

Thus, with a group of 125 learned monks, Atisha set off on a ship of merchants bound for Sumatra. It took thirteen arduous months to complete their journey, but Atisha remained undaunted throughout.

Atisha stayed in Sumatra for twelve years, avidly training with this master and had such exceptional reverence for this magnificent teacher from Sumatra and the measures he imparted that tears would well in his eyes whenever he mentioned or heard his name. Among his 157 teachers, Atisha said, “I make no distinctions among all my spiritual mentors. But because of the kindness of my sublime master from the Golden Isle, I have gained peace of mind and the dedicated heart of a bodhichitta aim.”

Another link which could complete the overall picture is the fact that His Eminence Dagpo Rinpoche was recognized by HH. Dalai Lama XIII as the reincarnation of Dagpo Rinpoche Jamphel Lhundrup Gyatso who possessed several of mind stream qualities from Bodhisatva Saparudhita, Gunaprabha, the Indonesian Guru Svarnadvipa Dharmakirti, Marpa The Translator, Longdol Lama Rinpoche Ngawang Lobsang and many more. This acknowledgement means that Dagpo Rinpoche is Serlingpa Dharmakirti.

Approximately 400 years since Atisha’s period, Buddhism decreased again in Tibet. Je Tsongkhapa reinstated the purity of the Buddha’s teachings, similar to what Guru Atisha had done before, with his masterpiece named “The Great Treatise on the Stages of Path to Enlightenment” (Sanskrit: Maha-Bodhipatha- Krama, Tibet: Lamrim Chenmo) which he wrote based on Guru Atisha’s previous work. Lamrim Chenmo then passed down within an unbroken lineage until today.

All these development foretells an important meaning that the teaching originally rooted from Indonesia through Guru Suvarnadwipa to Atisha may finally yet be coming back again to Indonesia through this unbroken authentic lineage from Sakyamuni Buddha to Ven. Dagpo Rinpoche down to the Sangha Community of Kadam Choeling Indonesa (KCI) particularly with the flourishing of the teachings of Je Tsongkapa’s Lamrim Chenmo. The literal definition of Kadam Choeling is to mean a place to spread the Lord Buddha’s teaching according to Kadam tradition now served by a group of dedicated monks currently headed by Venerable Bhadra Ruci whose main teacher is His Eminence Dagpo Rinpoche Jhampel Jampa Gyatso.

The constant growing numbers of Sangha members and lay people who join in with them and KCI as their main community organization is testimony to a resplendent revival of this Golden Lineage. Having Venerable Dagpo Rinpoche as its Spiritual Head, currently KCI has in its midst 6 fully ordained monks (Bhiksu), 8 novice monks (Sramanera), and 3 novice nuns (Sramaneri).

Inspired by many new followers and moved by the logic and purity of the explanations of the Lamrim teachings as brought down through this exemplary lineage, KCI’s mission with daily guidance from Venerable Lobsang Oser, is to preserve and spread the Lamrim. Since its initiation in 2001, the Buddhist community of KCI have been focusing much of their time to learn and embrace Lamrim in every aspect of their lives both secular and spiritual and the number of the lay members continue to expand in over 9 cities in Indonesia and now exceed the involvement of well over 1000 people. In response to such needs and to formalize its educational growth, there is now a plan to institutionalize this systematic curriculum into a Lamrim Monastery established in Indonesia with a name endowed from Venerable Dagpo Rinpoche himself – Indonesia Gaden Syeydrub Nampar Gyelwei Ling (The Center of Study and Practice for the Conquerors of Tushita).

The monastery project has just started in early 2013 and currently is in the process of land acquisition with an envisaged construction of it scheduled to be ready in 2014. To be situated in Kabupaten Malang Indonesia, this land rich in history spanning the time of Sriwijaya, Singosari and the Majapahit is set to enjoy a priceless revival in a Golden Lineage that deserves to be rejoiced and preserved.

We genuinely believe that this is the only possible way to preserve and maintain the pure, authentic Lamrim teaching from the unbroken lineage. May these dreams spread as vast as the wind and touch those who aspire to true happiness, and may they join with us in the task of spreading this unbroken and truly golden lineage.

Lenny Hidayat is the Social team Coordinator for KCI Monastery Project and a member of KCI Organizational Advisory Team. EH