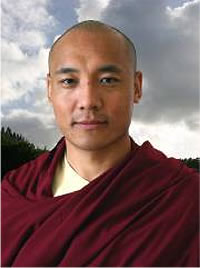 Anam Thubten grew up in Tibet and at an early age began to practice in the Nyingma tradition of Tibetan Buddhism. Among his many teachers, his most formative guides were Lama Tsurlo, Khenpo Chopel, and Lama Garwang. He is the founder and spiritual advisor of Dharmata Foundation (www.dharmata.org), teaching widely in the U.S. and occasionally abroad. He is also the author of various articles and books in both Tibetan and English. His books in English include “The Magic of
Awareness” and “No Self, No Problem”.

Rinpoche was in Malaysia in December 2012 and taught two retreats. He also attended the Mystical Dance performance in Kuala Lumpur. On January 2, 2013, Benny Liow of Eastern Horizon met up with Rinpoche and asked him some questions related to the topic of non-self, and the key message of his two recent books.

Benny: Can Rinpoche tell us something about your background, like who are your teachers, your lineage, why you came to the US, and how you became the Spiritual Director and Dharma teacher of Dharmata Foundation?

Anam Rinpoche: I grew up in Tibet and at an early age began to practice in the Nyingma tradition of Tibetan Buddhism. Some of my many Dharma teachers include Lama Tsurlo, Khenpo Chopel, and Lama Garwang. I later went to India where I met Tarthang Tulku who invited me to the US in 1992. However, I later decided to start my own Buddhist center called Dharmata Foundation, also based in California.

What is this Foundation about?

It is a non-profit organization formed in 2005 in Point Richmond, California, located on the east shore of San Francisco Bay. Dharmata Foundation is a non-sectarian Buddhist center that follows the teachings of Buddha and the lineage of great Buddhist masters – uniting individuals who have a genuine desire to discover inner freedom and peace through realizing the true nature of all things, The foundation also fosters meditation groups in multiple locations internationally and nurtures an extensive offering of daylong, weekend and residential retreats, as well as regular meditation practices.

“No Self, No Problem” shows us how to realize the ultimate meaning of life in each moment by dissolving all notions of ego identity. When we no longer have any notions of self, we realize our true nature, which is already enlightened. In “The Magic of Awareness”, I try to show that while awareness is very profound, it is at the same time very simple. Awareness cannot be easily described but it comes to us very naturally when we can live fully in the present moment. That’s when we attain true happiness without the ego.

We always hear this word “renunciant” or renunciation in Buddhism. Does it mean that to practice Buddhism one needs to become a monk?

So it’s like the story of King Indrabodhi you mentioned in your book “No Self, No problem”.

Yes, just like King Indrabodhi who went to see the Buddha and said that he wants to find liberation. Initially Buddha asked if he could become a monk and renounce everything. King Indrabodhi replied that he enjoyed the pleasures of good food, family, and entertainment too much to renounce and become
a monk. Then the Buddha explained to King Indrabodhi a path that led him to enlightenment without giving up anything externally but letting go of everything inwardly.

This is the heart of Buddhist practice – letting go of everything inwardly but this requires a special understanding. It means you can have everything but you cannot be attached to anything. For instance, you can eat ice cream – and even experience the vanilla flavor or strawberry flavor – but you should not be attached to it. After you have finished eating the ice cream, you are not craving for more and more of it. You can let go of the ice cream after it is finished. So we can have everything and we don’t have to give up anything, but the key is not to be attached to it. When we can do this, we have awareness of our true self and experience true happiness.

What would be your definition of true happiness? And how do we achieve it?

There are many versions of happiness. So it is important to define what it is. Happiness is not something we can achieve by accumulating things, or by realizing our beautiful illusions. It is a state of contentment – a state where attachment and fear are completely absent. It is a mental state where on-going obsessive desire of wanting has completely ceased. You can say contentment is state of emptiness rather than a state of having everything that we had always wanted in our imaginations.

The true spiritual path involves bringing about contentment through letting go of all attachment. But there is a big difference between giving up everything and giving up the attachment to everything. I am not saying we should give up everything – I think this is not possible anyway. If we understand the essence of the Buddha’s teaching, he is telling us that we should practice non-attachment by inwardly giving up or letting go of our selfish obsession and our identification with everything.

When we realize that this self is an illusion, is it the same as having realized emptiness? Is this emptiness the same as nothingness?

Emptiness is the source of all things. It is the infinite realm of love and compassion. So it cannot be nothingness which is a nihilistic view of things that the Buddha had rejected. Emptiness is also the truth because the truth is empty of all illusions.

Can you please give us some advice that we can take to practice non-self in our every day life?

No self or Anatman is the most central theme of the Buddhist teaching. The closer we look into it, the more it reveals universal truth instead of another outdated religious doctrine. Many meditators claim that they had first-hand insight of this truth. It is also true that many people come across this insight spontaneously without so much spiritual back ground as a surprising wisdom gift from life in order to understand the core of human beings. No self is a profound experience where we are no longer this
finite separate self which is bound to the chains of birth and death, but the infinite which is one with the universe from time immemorial. Because No Self is not just another religious doctrine, it is a wisdom that can be applied in everyday situation as a foundation from which we can lead a human life. To truly understand this wisdom, we might have to work with a spiritual master and start practicing meditation as a serious vocation. EH