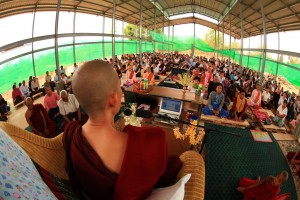 Why a Dhamma Hospital?

Sayadaw U Ottamasara was born in Sagaing Division, Upper Burma on October 26, 1969. His parents are U Tin Maung and Daw Khin Khin Myint. He passed the Matriculation examination with high grades, and subsequently entered Rangoon Arts and Science University. After graduating with a B.A Honors in English in 1994, he ventured into business for a few years. When his business turned bad in 1999, he was badly distressed. Thanks to a kind friend, he came to study meditation under the Mogok Vipsssana teachers. Putting himself into serious study and practice of Vipassana meditation, he soon began to find real peace of mind and was able to overcome his depression and sadness. He then pursued intensive vipassana meditation retreats at the International Meditation Centre of Sayagyi U Ba Khin and Dhamma Joti Meditation centre of SN Goenka in Rangoon. Eventually he went to the Mogok Vipassana Meditation in Rangoon where he continued to make progress in his meditation practice. Sayadaw then decided to establish the Wisdom Sharing Foundation known as “From Avijja to Vijja” which later became the leading place for the public to gain access to various forms of media (books, mp3CD, CD, VCD and tapes etc;) on Vipassana Meditation, and other aspects of Buddhism.

On October 21, 2002, he was ordained in Rangoon by Sayadaw U Nayyasagara. He then began to teach vipassana meditation and give Dhamma talks on Buddhism at schools and hospitals and to terminally ill patients from various religious backgrounds. In 2007, Sayadaw established ThanLyin meditation center in downtown Rangoon and later the Tha Bar Wa Meditation Centre at Yangon where he is currently its abbot.

Sayadaw U Ottamasara repeatedly stresses on the importance of Right Understanding in our meditation and daily lives for without it we will not be able to abandon our attachment. He also encourages us to do good deeds limitlessly in order to have the courage to overcome any fear or reluctance in wanting to do good. He believes that not only healthy people should be taught meditation but also the old and the sick. As a result of his emphasis on teaching meditation to people from every level of society, especially those seeking medical care, Sayadaw is now planning to build a Dhamma Hospital. Sayadaw has kindly allowed Eastern Horizon to feature his project on the Dhamma Hospital.

Can you tell us about the reason for setting up a Dhamma Hospital when there are many other hospitals in Burma?

The Dhamma Hospital is to cater for patients who are old and sick but wish to learn meditation. When we reach old age and become sick it is very difficult to stay at home. Those who are old and sick require special attention most of the time. A hospital would be a perfect place for them but hospitals in Burma are sometimes not available or beyond their affordability. This is why I want to solve the problem by establishing Dhamma hospitals in Burma for the people. With Dhamma hospitals, people will not need to worry about becoming old or sick or that nobody would take care of them. They would have the opportunity to stay in the Dhamma hospitals until they finally pass away. And it will be free of charge for all patients who come to the Dhamma hospitals. They will then be able to live the rest of their lives in peace and without any worries.

Would the Dhamma hospitals cater for mental patients too?

Will volunteers, including the doctors also learn about meditation?

Yes, I also like to train doctors and physicians on the theory and practice of meditation, and to share  with them the amazing benefits of meditation practice. When one practices meditation long enough, one can experience changes in the mind. The Buddha had taught that if you are sick, do not allow your mind to be sick. So if you meditate, even when you are physically sick, your mind will be calm and peaceful. Then you only need medicine to treat the body, and not the mind. So meditation is indeed wonderful and should be recommended for all doctors and physicians as well as the nurses and other volunteers at the Dhamma Hospital.

Do people need to pay to go to the Dhamma Hospital?

Can anybody participate in this Dhamma Hospital project, including foreigners and physicians?

Yes, the Buddha Dhamma is open to everybody. So everyone is welcomed to learn the Dhamma and to practice meditation. If they participate in the Dhamma Hospital, they will realize that it has immense benefits for the people. As such they are strongly encouraged to support our work to build the Dhamma Hospital.

You have set up the Thabarwa Meditation Center as part of the Dhamma Hospital? What type of meditation do you teach?

The Thabarwa Meditation Center was established principally for the study and practice of Vipassana (Insight) Meditation. It is open 24 hours a day, seven days a week. Currently, there are more than 1,400 yogis in the center. Like the principles behind the Dhamma Hospital, everybody is welcomed to attend meditation classes at our center where we provide food, clothing and medical care for free to whoever cannot afford. In this way, everybody – whether they are old, sick or poor – can receive the benefit of insight meditation. Besides learning how to meditate, the yogis also learn about the core principle of Buddhism, which is about liberation from all attachments. I will guide meditators who are sick, including those terminally ill, to follow the right way to end all suffering and to realize nibbana in their dying moments.

How can we support the Dhamma Hospital and other projects that you are working on?

We welcome all support from the public to make the Dhamma Hospital a reality. Please contact the following: